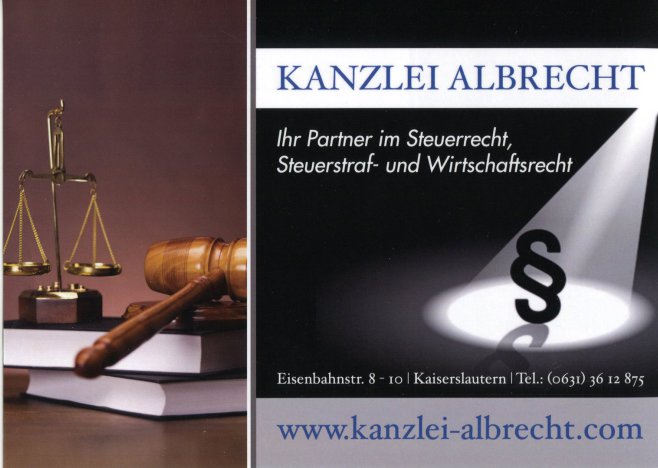 This site we provide for our american clients. 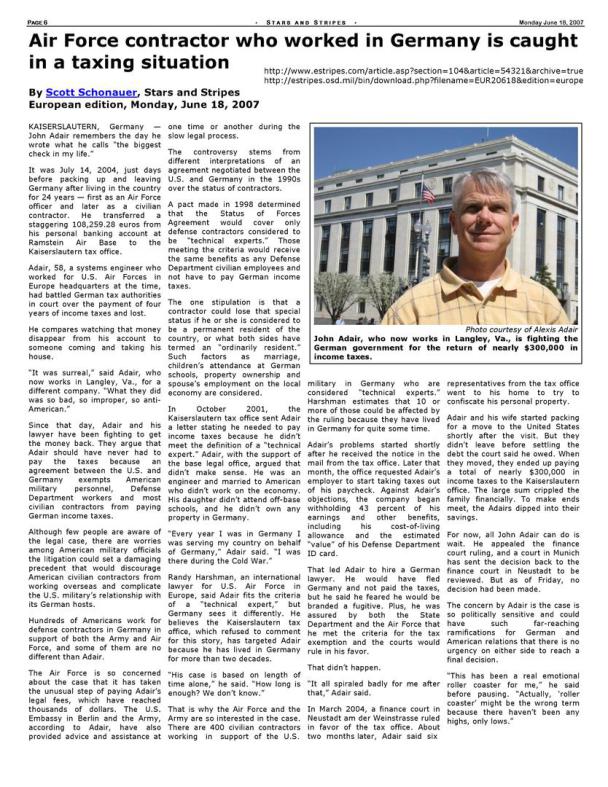 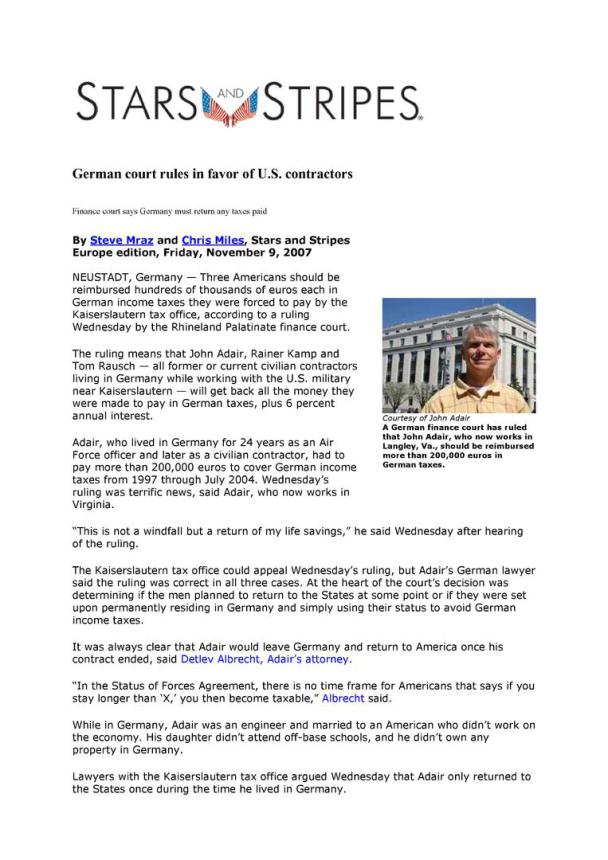 Letter to the Editor Stars & Stripes:

I am delighted to advise that there was a highly favorable outcome in the tax trial in Neustadt.

The case involving John Adair vs. the Kaiserslautern Finanzamt has now been clearly and firmly decided in John Adair's favor.

The K-Town Finanzamt will be required to return the $300k that Mr. Adair was required to pay in taxes...plus the Finanzamt must also, under German law, pay 6% interest for each year that it held the money. (The sweetener is that no taxes are payable on any of these funds to include the interest.)

My favorite German lawyer (Mr. Detlev Albrecht) has now set a precedent which was reportedly described by one local official as "a black day for German taxation."

Mr. Albrecht was alone in the court while there were 8 lawyers and tax officials representing the Kaiserslautern Finanzamt.

A key element was the notion that length of time in Germany should not play into any decision to tax...and also that Article X was being interpreted too liberally by the Finanzamt.

Mr. Albrecht advised that several U.S. military & civilian lawyers were in the court to include senior representatives from USAREUR and USAFE. There were also two reporters from Stars & Stripes.

A clear precedent has definitively been set and I would expect any law-abiding DOD contractor with TESA certification to be reasonably protected from German taxation. However, I am sure there will be other cases...and each will need to be judged on its own merits.

My hat is off to Mr. Albrecht who has served U.S. interests above and beyond what one might expect from the German legal and taxation systems.

I expect we'll be hearing more about this later...but, for now, I'm delighted we can finally put one in the win column.

‘This is discrimination’: Germany seeks income taxes from US airman because he's married to local woman

STUTTGART, Germany — Tax authorities are demanding a Ramstein-based airman pay German income taxes because he is married to a local woman, setting up a potentially precedent-setting case that could have financial implications for scores of U.S. troops in the country.

The move levies double taxation on an airman who already pays U.S. income taxes and potentially threatens service members who marry Germans or take any number of steps to integrate into life outside the base gates.

There are now 387 tax cases involving U.S. Defense Department personnel in the greater Kaiserslautern area, home to the most U.S. troops in Germany, local tax officials told Stars and Stripes.

It’s unclear how many of those cases involve active-duty personnel, but some service members are now considered viable tax targets, tax officials said.

“It is true that the Rheinland-Pfalz tax offices levy taxes on U.S. soldiers who are married to a German spouse if their income is subject to German tax liability,” said Peter Leismann, a spokesman for the Kusel-Landstuhl finance office.

But the circumstances German authorities say are taxable, despite the NATO Status of Forces Agreement’s general exemptions for U.S. forces from foreign income taxes, have grown substantially in recent years.

Master Sgt. Matthew Larsen in Ramstein was informed by the Kusel-Landstuhl tax office in December that his SOFA exemption is no longer recognized.

Larsen filed taxes in the U.S. while his wife, Kathrin, legally filed separately in Germany. On a questionnaire, she wrote that her husband was a service member.

Larsen said a worker at the Kusel-Landstuhl tax office told him his marriage to a German is an indication he is in the country for reasons other than his job and that this obligates him to pay German income tax.

“I am here on orders. I am literally ordered to be here. But they are saying that, because I am married to a German, my SOFA status is irrelevant,” said Larsen, who has been based at Ramstein since 2015. “This is discrimination. They are going to be going after a lot of other people and this has to stop.”

Larsen’s tour in Germany ends in August, after which he said he plans to retire from the Air Force and move to Florida.

That hasn’t stopped German tax authorities, who demanded Larsen provide a declaration of income for back taxation, something that he is resisting and could have to fight in court.

“We have a wave of Americans getting harassed from the side of the German IRS and it is getting worse and worse,” said Detlev Albrecht, a Kaiserslautern-based German tax attorney who is handling about 50 cases involving American military personnel locked in battles with German tax authorities.

Larsen, who is Albrecht’s only active-duty client, said he was forced to retain an attorney to avoid a 10,000 euro fine, or about $11,000, and the prospect of prison time for refusing to turn over documents. The hope is for the courts to dismiss the case, Larsen said.

In recent years, German tax offices have grown more aggressive in targeting U.S. Defense Department civilians, even though they too are in the country under the SOFA, which is intended to protect them from double taxation, Albrecht said.

Going after active-duty troops, at least until now, has been almost unheard of, Albrecht said.

However, it’s possible that active-duty troops have been snared by tax authorities but haven’t sought outside help.

U.S. Army Europe, which is in charge of SOFA issues for the military in Germany, said it does not track how many troops or other personnel have been forced to pay German taxes.

USAEUR’s Office of the Judge Advocate also said the command “disputes the German interpretation of the SOFA and has brought its arguments forward to the German Foreign Ministry.”

But Albrecht said the issue remains pressing for his clients.

“The reason we have this problem is the political action on the U.S. side is not strong enough,” he said.

At issue is Article 10 of the SOFA treaty, which establishes an exemption from German taxation for personnel who are in Germany “solely” because of their jobs.

Historically, military orders for service members and civilians were sufficient proof for the tax exemption. But German tax authorities have begun interpreting “solely” in different ways.

Now, a key question is whether military members intend to return to the United States.

Personnel stationed in Germany for many years – there is no standard for just how many – or with significant ties such as being married to a German, owning property, sending children to German schools or even extending tours could call SOFA status into question, U.S. military officials in Europe said.

Such circumstances “may result in German authorities alleging the DoD member intends to reside in Germany permanently and therefore must pay income taxes due,” U.S. Air Forces Europe said in a statement.

Once in the German legal system, the burden of proof is on the individual claiming tax exemption, USAFE said.

The problem is connected to a 2007 revision in the U.S.- German tax treaty on double taxation, which opened the door to full taxation of U.S. government pay if German authorities decide SOFA status doesn’t apply, USAFE said.

Keeping off the radar

USAREUR is advising service members to take preventive measures to stay off the radar of German tax authorities. For example, do not register for residency with a local German town hall.

“Doing so will trigger a German tax ID number,” USAREUR said in a statement.

Also, do not file a joint German tax return with a German spouse, which indicates to the German government a desire to be taxed like an ordinary resident, the Army said.

German spouses should avoid changing their tax class after getting married, because it signals to tax offices that they need to probe the other spouse’s reasons for being in Germany, the Army said.

Albrecht said he has seen cases involving military civilians occur in most areas where there are bases. However, the Kusel tax office, not far from Ramstein, has proven to be the most aggressive, he said.

“If a willingness to return cannot be proven, the income of US soldiers in Germany is taxable,” Leismann, the spokesman for the Kusel-Landstuhl finance office, said in a statement.

The financial stakes for the military community can be high. Albrecht has a civilian client who lives in the Mannheim area faced with an 80,000 euro tax bill. Part of that came from tax officials factoring in privileges like less expensive on-base gas, access to post exchanges and even cheaper cigarettes.

”The German side has the opinion this is income and they tax the privileges, which they say is about $15,000 per year,” Albrecht said.

In the past, German courts have on occasion ruled in favor of Americans with military connections.

In 2007, three American contractors were reimbursed hundreds of thousands of euros each in German income taxes they were forced to pay by the Kaiserslautern tax office, after a victory in Rheinland-Pfalz state finance court.

Albrecht said he is confident Larsen, the airman, also would be victorious if the case goes to court.

But Larsen says that’s a fight he shouldn’t be forced into, and that U.S. military leaders should take a more aggressive stance in supporting personnel being targeted.

“The stress of this is unbelievable,” Larsen said.

... and you certainly do deserve being referred to as the best Tax Lawyer in the State of Rhineland-Palatinate!

Renate and I are very proud of you. We shall never forget what you have done for us. We feel very grateful to you. And we must think of it every day.

We know very well that it has been nothing but your very intervention to which we owe our two old lives. It has been your generous help and your valuable advice. God bless you and your dear wife!